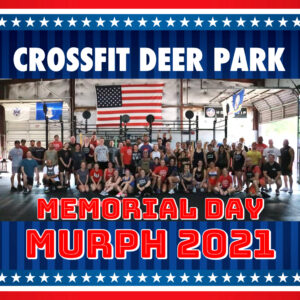 – The workout can be done solo or partnered or you can do what you can, we have tons of options for you to take part

– Please dress up in red, white, and blue. We will do a group picture before.

Over the past decade in many Tactical Fitness circles, members have been doing the Memorial Day Murph. The “Murph” is a workout used by Navy SEAL, Medal of Honor recipient, Michael Murphy. Murphy died when exposed to enemy fire while attempting to radio headquarters for assistance. The Murph was first made popular by the CrossFit community, who perform many workouts created to honor fallen heroes, commonly called the Hero’s WOD (Workout of the Day).

Murphy was killed on 28 June 2005 after he left his cover position and went to a clearing away from the mountains, exposing himself to a hail of gunfire in order to get a clear signal to contact headquarters for relaying the dire situation and requesting immediate support for his team.[13] He dropped the satellite phone after being shot more than 14 times but picked the phone back up and finished the call. While being shot, he signed off saying- “Thank You”,[14] then continued fighting from his exposed position until he died from his wounds.[2]

On 4 July 2005, Murphy’s remains were found by a group of American soldiers during a combat search and rescue operation and returned to the United States.[15] Nine days later, on 13 July, Murphy was buried with full military honors at Calverton National Cemetery.